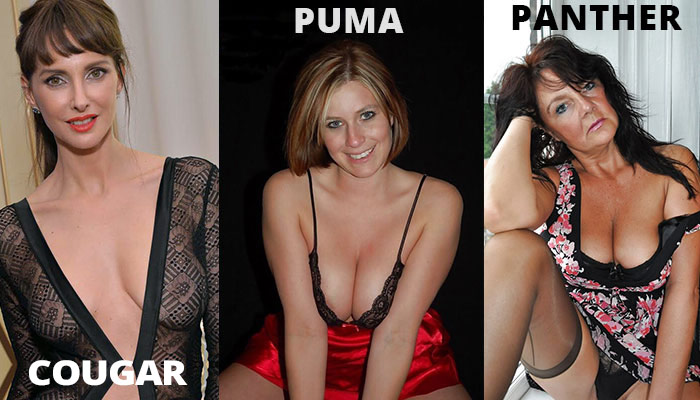 What makes a woman a cougar? What makes a woman a puma? What makes a woman a panther? While all three are terms used to describe women who enjoy the company of younger men, they are all slightly different but in some very meaningful ways. There is a certain breed of women who, just like big cats, prefer to hunt and conquer younger male animals. No matter their age, they prefer men younger than they are when it comes to romantic and passionate encounters. There is no shortage of men who want to be conquered, either. Before entering into the world of older women, you must familiarize yourself with the terms used to describe them. While some of these women don’t mind the labels, others are annoyed or even offended by their use. So be careful not to use them in her presence unless you hear her use them herself. Lets take a look at the difference between a Cougar, Puma, & Panther…

What makes a woman a puma?

Women of all ages can be attracted to men younger than them, even women who are young themselves. Women in their 20’ and 30’ who are sexually attracted to men who are 18 – 20-something, are called Puma’s. They aren’t interested in men their own age, or older guys. They prefer young men with less responsibility and maturity. Puma’s are turned on by the youth factor. Guys in their early twenties are raring to go no matter what is on the agenda. Everything is an adventure; from going to the grocery store to weekend trips. These women will eventually become cougars and panthers.

What makes a woman a cougar?

Once women reach the age of 40, their perspective on life can change. They find that different things are important to them than was in their younger years. Careers are well underway by this phase of life and women have found a financial security that allows them to depend on themselves instead of a husband. Some women find when they hit this stage of life they are attracted to men in their 20’s. They enjoy the virility and strength of men this age and revel in the casual atmosphere the bring with them. It’s like a breath of fresh air to be around a man who enjoys life to the fullest and has fun with everything he does.

What makes a woman a panther?

Age has no bearing on sexuality or passion and women who have earned the label of panther are living proof of that. A panther is a woman who has reached the age of 55 and is sexually attracted to men younger than her by 15 years or more. She is well established by this age and needs a man in her life for pleasure only. She doesn’t need monetary support or even emotional support. She learned long ago that she could support herself better than anyone else can. Being a panther means being attracted to much younger men but also having much younger men attracted to her. Panthers have a certain sex appeal that women half their age cannot muster. It is a gift that can’t be replicated or learned.

What Is the difference between a Cougar, Puma, & Panther?

The difference between a puma, a cougar and a panther is essentially their age. While their interests and priorities also change with each label, the determining factor is age. Simply being of a certain age and being interested in younger men isn’t the only factor. If there isn’t anyone interested in dating them, then they aren’t actually engaging with these guys. The reciprocal interest of younger men is a necessary part of earning each label. The ability to catch and release a younger man is an integral part of who these women are.

Sport fucking is more like a way of life for many of these gals, but a real relationship is not out of the question. Connection is big with these women. Relationships are more about connections, emotionally and physically, than their ages or anything they may have in common because of it. Tread carefully, if you decide to go this route. These women are savvy as well as sexy. If you don’t have your act together, you won’t last long.