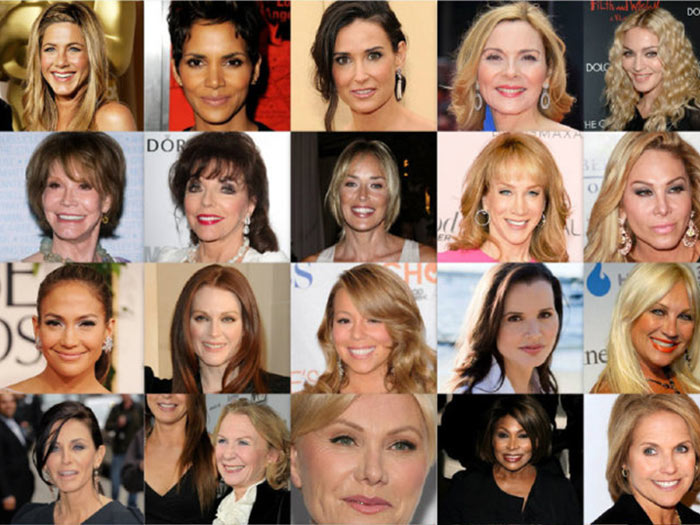 Cougars are women who continually date much younger men. It isn’t much of a taboo these days but it’s still a little risqué. Usually, cougars are hot. So hot, in fact, that no one call tell they are as old as they are. Cougars are hot, fun and sexually experienced. What’s not to like? Cougars can be found in all walks of life and all over the world. It has become more and more socially acceptable. This is partially in thanks to celebrity cougars who bring their lifestyle to the forefront of social consciousness and force us to deal with it. Celebrity cougars have made cougar life a thing of beauty. Below are the top ten most famous celebrity cougars.

Once Demi was divorced from Bruce Willis, she followed in the path of cougars across the globe and caught herself a fine young cub. Dating Ashton Kutcher, many years her junior, put Demi right back on top. Not only did she date a studly young cub, she married him. Demi is a classic example of a cougar who can’t help it. Sure, she works hard to stay fi and trim, but those facial features can be attributed only to good genes. It doesn’t matter how old she gets. Demi will always have a cub chasing her.

She played Cat Woman but she is a real life cougar. She was married to considerably younger baseball player, David Justice, for years. Eric Benet was next, also young as heck. Gabriel Aubry, a model ten years her junior was next on the chopping block. Olivier Martinez, a French actor was another cub Halle courted. There is and always will be a never ending stream of younger men for this cougar to crush. She has dated a string of other, non-famous, cubs as well. This is a cougar with no qualms.

Holy News Casters, Batman! This gal takes the cake. Although a respected news anchor and longtime caster, Joan Lunden has made headlines for her cougar life. She married a man 10 years younger than her at 50. While that is surprising enough, she also decided to have kids with him. Think that’s enough? Not yet. They couldn’t have kids the normal way so they found a womb-for-hire and had twins. They had one more surprise in store and had another set of twins with the same hired womb years later.

Sharon Stone will be a hottie when she is 101. She drives a Jaguar, wears leather skirts and swills whiskey like a champ. It’s just that simple. She has dated many younger men, right in the public eye, including Chase Dreyfous, with on again-off-again furiousness. It isn’t unusual to see Sharon at a red carpet event with a young man by her side. In fact, we have become accustomed to it.

We all knew her as famous wrestler, Hulk Hogan’s wife. She was with him through thick and thin as well as a few hairy episodes of a reality series. It wasn’t long after the shows demise that we began to see the real Linda. She divorced the hulk and began to date a series of much younger men. (One ending in a legal battle) They were also much hotter than Hulk Hogan so we might understand the inclination. She might not be everyone’s cup of tea but she is definitely a bit hotter than the average gal her age.

Madonna is so hot everyone wants to be with her. Young, old, rich, poor, male, female. It runs the gamut. She has been on the music scene for decades and the movie scene has been her on again off again playground. She has consistently dated younger men throughout her life. No matter how young she was, her men were younger. This leads us to believe cougardom isn’t a choice but a genetic predisposition. No matter which song is your favorite Madonna diddie, you’re sure to fall head over heels with this true cougar. Rumors say she is currently dating 25-year-old Aboubakar Soumahoro, a 30-year-old model.

In the 80’s this bad girl rued the cougar roost. She is still scratching her way to the top in 2016. She played in Dynasty (watch a scene), one of the States most prolific primetime soaps of all time. She was a cougar long before that, however. She made the news when she spoke of the 32-year age difference between her and her then husband saying, “If he dies, he dies.”.

This cougar is a bit old school. Way back in the 50’s this hottie was catching cubs like there was no tomorrow. She spent many years married to a younger man, played cougars on tv and movies, and then came her fourth husband. That was the marriage that truly made her a cougar. He was 15 years her junior. Ms. Welch posed topless many times and made no bones about her cougar status.

Ivana Trump is arguably the most famous cougar in the land. She divorced Donald Trump only to replace him with a bevy of young studs. She even had a television show called Ivana Young Man in 2008. She eventually married a young man and lived happily ever after.