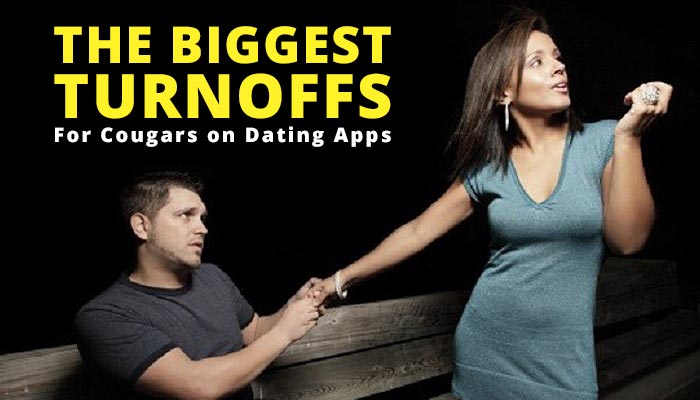 Dating apps have become the norm for finding action whether it’s just a hookup or something long-term. [Biggest Dating Apps In 2018] Even cougar dating has moved online as the older generations become more computer-friendly. It is just as easy to find a cougar on a dating app as it is a woman of any other age. The complexities come in when you start factoring in HOW to pick up a cougar on a dating app or site. There are some major differences in what cougars find annoying and a turn-off as compared to younger women, especially on a dating app. Distinguishing the biggest turnoffs for cougars before you get started on the hunt is going to put you one step ahead of the game.

Younger women may be used to it, and even do it themselves, but constantly checking and playing on your phone is a big turnoff for cougars. [Here is the psychological reason we cant stop checking our phone] Emergency texts and phone calls are one thing, but if you are constantly on your phone, not only is it rude but it is also offensive. You asked her out because you wanted to spend time with her, so do it. Put your phone on vibrate and store it out of sight. Pay attention to your date.

Cougars are confident women. Even so, blatant ogling of other women will make any cougar uncomfortable and irritable. Having a wandering eye for other women in the room is a turnoff for cougars. They feel that they have taken time out of their life to spend with you. What’s the use if you spend that time checking out every other female who passes by? This is a sure-fire way to never get another date with that cougar.

Big Turnoffs For Cougars – Talking About Your Ex

What’s the use? Is there really any purpose to telling your date all about your past relationship? What could you hope to gain from asking about her past love life or telling her about yours? Talking about other women is a turnoff for cougars as well as any other woman. These are subjects that will come up with time. If you’re just hooking up with a cougar, don’t bother. If you’re investing time and hope for a long-term thing, these subjects will naturally work their way to the surface.

Big Turnoffs For Cougars – Being To Needy

Want to know the biggest turnoff for cougars everywhere? Be needy, clingy, and take liberties with her as if you have been dating for years. Cougars are stable, established women. Their place in life has come from years of hard work and determination. Coming in on the first date like you are desperate for a relationship is not only a turnoff for cougars but also a sign of mental instability. Steer clear of this behavior when your dating a cougar. It won’t get you far.

This one is a big deal for cougars. Some may say the number one turnoff for cougars is showing up smelly and unkempt. If you are going to take a cougar out you will want to look your best. You don’t have to have expensive cologne or attire, but you do have to have a clean and tidy personal style. Let her know you spent some time getting ready for this date and you wanted to look and smell nice. It is flattering to her and it makes you a lot nicer to be around.

Big Turnoffs For Cougars – To Much Sex On The Brain

Yes, she dates younger guys because she enjoys the stamina and creativity of their lovemaking. Constantly talking about sex, making sexual innuendos, and telling dirty jokes is a turnoff for cougars. Acting like that is juvenile. She likes younger men but not childish assholes. Who has time for that?

Turnoffs for cougars are simple. They enjoy authenticity. Be who you are. Don’t put on airs or try to be something you are not just to get close to her. She will be able to tell and it will backfire on you. Concentrate on making a friendly connection. Find out what you have in common and build on that. Listen to what she has to say instead of just waiting for your turn to talk. You’ll be surprised how far it will take you.